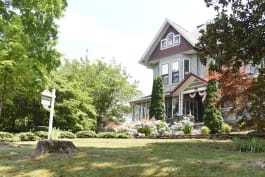 Cornstalk Heights is a neighborhood in Harriman, Tennessee, United States. Platted in the early 1890s as a residential area for Harriman's upper and professional classes, the neighborhood contains over 100 buildings added to the National Register of Historic Places in 1991 as a historic district for their architectural and historical significance. The neighborhood is named for the home of Harriman founder Frederick Gates, which once stood near the eastern end of the district.

Harriman was envisioned as a large-scale industrial center where the application of late 19th-century social reform principles, namely prohibition, would create an ideal living environment. The East Tennessee Land Company, led by Gates, designed the city in late 1889, including in the design several larger, more expensive lots in what is now Cornstalk Heights. Most of the district's earliest houses cost over $3,000 apiece, with some as high as $10,000— enormous sums for the period. Throughout the 1890s and early 1900s, Harriman's affluent residents built dozens of Victorian homes, most of which are still standing. In 1990, the Cornstalk Heights Historical Community Organization was formed to prevent the district's Killeffer Park from being converted into a housing development.