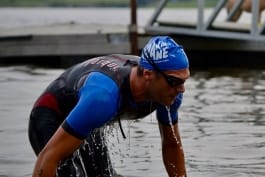 Storm the Fort Half (Half Storm) -

The Race for the Cannon enters its 7th year as a half distance event. A 1.2 mile wave start triangular swim course, followed by a rural rolling 56 mile bike ride (no major climbs) with three bottle exchanges. The run course will be two laps on the Kingston greenway and through downtown Kingston, with the first lap running past famous Fort Southwest Point. The run course will include fully stocked aid stations ~ every mile. Performance shirts, race logo DeFeet socks, and finisher medals to all participants, miniature cannon awards to age groups, and the coveted genuine cannonball awards to overall male and female winners. Expected half option participation—150.

Packets may also be picked up on race morning at 58 Landing (transition area/swim start), HWY 58 South, Kingston, starting at 6am.